The Proud History of the Marietta Fire Museum 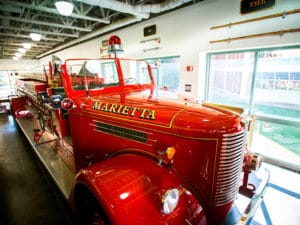 In the early days of Marietta, fire safety was left in the hands of volunteers. The city relied on bucket brigades, which were teams of volunteers who would pass buckets of water hand-to-hand from a water source to the fire to fight any blazes. After a massive fire in 1854 destroyed most of Marietta Square, it was clear the town needed more serious fire protection. That’s when the Marietta Fire Department was officially formed. Today, the Marietta fire station is located at 112 Haynes St. and is home to a very special piece of Marietta history: the Marietta Fire Museum.

This free museum houses over 160 years of the Marietta Fire Department’s proud history. Guests can take a look at the old steamers and fire trucks used to fight fires in Marietta as well as antique equipment, helmets from around the world, and stories of heroic firefighters. The pride and joy of the Marietta Fire Department is an 1879 Silsby Steamer fondly referred to as the “Aurora.”

Purchased by the city in 1879, the Aurora is one of five Silsby steamers still in existence. The fact that the Aurora still exists at all is close to miraculous. During World War II, any steel machinery that wasn’t actively in use was melted down and used in the war effort. The horse-drawn steamer had been replaced by a motorized fire truck in the 1920s, but the Aurora was still on display at the fire department. To protect this piece of history, firefighters dismantled the Aurora and hid it so it wouldn’t be melted down.

The story of the Aurora is just one of many memorable stories waiting to be shared at the Marietta Fire Museum. The museum is typically open for self-guided tours on weekdays, and you can schedule a visit for a guided tour with a firefighter for a small group if you do so at least a week in advance. However, the museum has bene closed to the public and tours have recently been suspended due to the coronavirus pandemic. Check the website for updates: MariettaGa.gov/189/Fire-Museum.