Articles and blogs related to Auto, Moto and Truck Accidents Some laws are more straightforward than others. Since the Georgia General Assembly passed the Hands-Free Georgia Act in summer 2018, some drivers have been confused about whether they’re allowed to wear headphones while driving. While headphones and Bluetooth headsets enable drivers to talk on the phone hands-free, they can also decrease a driver’s attention to important audio cues while driving, like the sound of an ... Read More Yes, You Need a License to Drive a Moped in Georgia The number of ways to get around seems to be forever multiplying. It’s important to be informed about the rules and regulations for your chosen form of transport, and regulations for some of the less common options, like mopeds, are not as well-known. What makes a moped a moped? Before you can determine what’s required of you as a driver, you first have ... Read More In Georgia, They’re More Complicated Than You Think! In This Issue: Who Wins in the Case of Driver vs. Pedestrian? If you get hit by a car, you might think your case against the driver for your injuries, loss of wages, and diminished quality of life is open and shut, but that’s far from the truth. According to a handful of statutes in Georgia law, cases of drivers versus pedestrians can go either way, ... Read More For Going the Speed Limit In This Issue: Georgia’s ‘Slowpoke’ Law Just because something has been a law for a while doesn’t necessarily mean it’s very well-known or widely followed. Such is the case for Georgia’s “slowpoke” law, which lets the police ticket you for going the speed limit, provided you’re doing a few other things as well. The Georgia Senate OK’d House Bill 459 — more commonly known as the ... Read More Automobiles, Assembly Lines, and the Most Common PI Claim On Oct. 1, 1908, Henry Ford’s first ever Model T went on sale. Along with his automobiles, Ford is credited with pioneering the assembly line system at around this time, making the Model T the first truly mass-produced vehicle in the country. The time it took to build one decreased from 12 hours to 30 minutes, and the fact that Ford’s factories could make ... Read More The Insurance Information Institute reports that 12% of Georgia drivers are uninsured. We expect this number to rise dramatically due to the financial strain caused by the COVID-19 pandemic. ... Read More 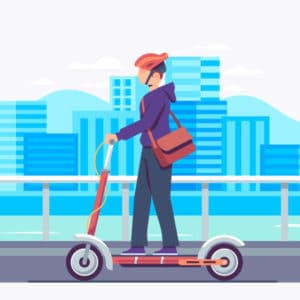 Both fans and opponents of e-scooters have strong opinions. Many cities have taken an active stance against e-scooters, including Marietta. In February 2019, the Marietta City Council unanimously voted to ban e-scooters entirely. ... Read More In a personal injury case, you may seek compensation from whoever caused or contributed to those losses if you have suffered injury, property damage, or any other type of loss as the complainant. The legal term for such compensation is "damages." There are several different types of compensatory damages, but they are broken down into general or special damages in general terms. ... Read More Will a New Law Make Your Next Car Cheaper? Theatre Thinking about buying a new car this year? Then you’re in luck! Thanks to a new Georgia law that went into effect on Jan. 1, 2020, you’ll be saving some money on that next big purchase. Get to Know Law SB 65 In 2019, Law SB 65, also known as “Title Ad Valorem Tax: Used Cars and Tax Rate,” was approved by the Georgia General Assembly. This new law amended the ... Read More